How to Migrate Gmail to Outlook PST
Learn the Complete Process 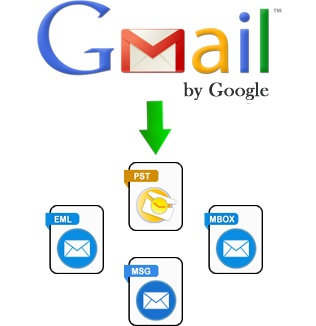 Now user can discover and execute the easiest process of how to migrate Gmail to Outlook PST or Outlook Express EML with the Gmail Backup software as this solution is complied with simple user interface guide. This Gmail backup software is used by every user whether they have any technical knowledge or not, as every user wants to protect their data from unwanted lose that is why they create a backup for their Gmail account. With this named application user can make backup of Gmail account and they can also convert the data in the following file format :

Why Make Backup of Gmail Data?

Many years back it was reported that in year 2009 Gmail services went offline, Google executive reported that it was happen due to unexpected load on the server. But due to this many user lose their crucial data. To overcome such situation many companies come up with the Gmail backup application but our organization application is termed as

User can explore the process of how to migrate Gmail to Outlook PST or EML file format by running its trial version. But the only restriction is with demo version is that user can't make backup for their entire Gmail account emails; they can take backup of only 25 items per folder. Those users who want to take entire mailbox backup they can purchase its licensed version.